US Carnival Glass by Angela Bowey

Photographs in this article are by Frank Habicht 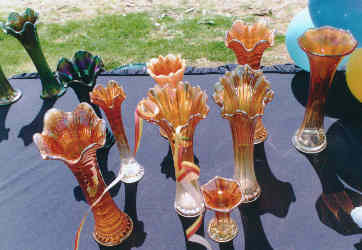 Carnival Glass was first produced on a large scale in 1908 by the Fenton Art Glass Company at their new glassworks in Williamstown, West Virginia. John W. Fenton (President) and his brother Frank L. Fenton (General Manager and Secretary) had (with their team) developed a relatively stable and safe method of mass producing iridized glass. They named their first lines "Iridill" and "Rubi-glass" and described it as "a metallic lustre much like the Tiffany favrile glass". Glass workers at the time called it "dope glass" because the hot glass was treated (or doped) with metallic sprays and vapours. It was instantly popular with the public, and they sold as much as they could make. 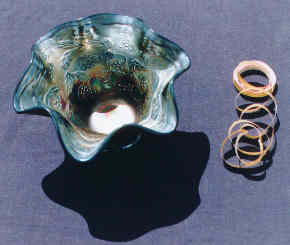 This little blue carnival glass bowl (below right) is called "French Knots" and was attributed to Fenton by Hartung. This kind of bowl is what is sometimes called a "ruffled-top hat-shaped novelty", and is a typical Fenton shape. "French Knots" is listed as a Fenton pattern in Heacock's book "Fenton Glass: the first 25 years". Good pictures of this pattern are not all that common, so I have included below a close-up of part of the pattern, showing the flower-shape made up of six dots.

There is no dispute that Fenton were the company which first introduced large volume pressed glass with an iridized finish in the USA. It is usually conceded that Harry Northwood was the person who brought the technique to the USA from his father's glassworks in England. Northwood described this glass as having a "changeable metallic sheen". It's instant popularity owed a great deal to the expensive iridized glass made by Tiffany and Steuben around the turn of the century. It was often called "Poor man's Tiffany" and as Raymond Notley said "it delighted a generation and brought colour into drab homes".

It marked the end of popularity for Tiffany glass. As Frederick Carder said "When the maid could possess iridescent glass as well as her mistress, the latter promptly lost interest in it". The rage for Carnival Glass in the US continued for ten years (1908 to about 1918), and the last of the original US producers, Dugan Glass Company (later Diamond Glass Ware) of Indiana, Pennsylvania, continued production right through to their closure from a fire in 1931. But the market for this type of glass had already moved overseas, and US companies were exporting Carnival glass to Europe, Canada, Australia, and other countries during the 1920's. Carnival Glass was not, so far as we know, produced in the USA between 1931 and the 1950's. 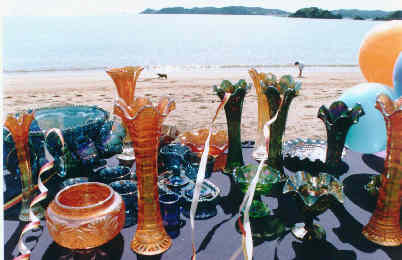 During the 1950's collectors became interested in Carnival Glass, so much so that it became economically worthwhile for glass manufacturers to start making it again, specifically for collectors.

Many companies started to add an iridized finish to patterns they had been selling in clear glass. For example, "Iris and Herringbone" was a very popular pattern made by the Jeannette Glass Company, USA. They made it in clear glass (usually called "crystal" but it is pressed glass) from 1928 until the 1970's. And they made it in Marigold Carnival during the 1950's. I believe they also made some crystal "Candy bottoms" during the 1970's and sprayed them with two-tone iridescence (eg red and yellow). It is a very popular collectable pattern.

Other companies, notably Fenton and Imperial, re-introduced Carnival Glass in the 1960's using both the original designs and new designs. To encourage and assist collectors, they carefully ensured that this new carnival glass could easily be distinguised from the originals, by putting distinct trade marks on the glass. Some manufacturers have not been so helpful, and there is reproduction carnival glass around, sometimes being made from the same molds.

If you would like to know more about Carnival Glass there are some excellent books available. For more information, click on the book title.


Standard Companion to Non-American Carnival Glass (Jan 2006) by Bill Edwards and Mike Carwile. Covers carnival glass from Europe, Australia, Scandinavia and India.
Collector's Companion To Carnival Glass: Identification & Values (Feb 2005) by Bill Edwards & Mike Carwile.
Carnival Glass : The Magic and the Mystery (Revised version Jan 2007)(Schiffer Book for Collectors) by Glen and Steven Thistlewood
Dugan & Diamond Carnival Glass 1909-1931 : Identification & Value Guide (Dec 1998) by Carl and Carol Burns. Dugan and Diamond were major producers of Carnival Glass.
A Field Guide to Carnival Glass (Oct 98) by Dave Doty. A really excellent, easy-to-use aid to identifying carnival glass patterns.
Fenton Glass: the first 25 years (Dec 1990 with a 1998 price guide) by William Heacock. 144 pages about the people, the company, and the glass they made between 1905 and 1930. Fenton were one of the major producers of Carnival Glass in those early years. The book has numerous coloured pages showing hundreds of glass items.
Westmoreland Glass: Identification and value guide (Jun 96) by Chares West Wilson. the Westmoreland Glass company also made some carnival glass, although it was not a major part of their production.
Standard Encyclopedia of Carnival Glass 9th edition (June 2004) by Bill Edwards and Mike Carwile, an essential book with over 2000 patterns photographed in colour. There is a price guide, if a bit dated now.
Collecting Carnival glass (March 2002) by Marion Quentin-Baxendale. Revised edition, covers patterns identified by shape, colour and makers.
The Big Book of Fenton Glass: 1940-1970 (ept 1999) by John Walk. Covers the output from Fenton Art Glass Company, one of the most prolific producers of Carnival Glass over a long period.
American Iridescent Stretch Glass: Identification and Value Guide (July 98) by John Madeley and Dave Shetlar(new). Iridescent Stretch Glass is not strictly Carnival Glass, but it is very close!

- save time and don't miss an opportunity
even when you are busy!


Copyright (c) 1998 - 2021 Angela M. Bowey.
All rights reserved. Copying material from this page for
reproduction in any format is forbidden.
Web site designed by: Angela M. Bowey.
URL to this page:
http://www.glassencyclopedia.com/carnivalglass.html